Friendsgiving: A Positive for Grocers Throughout the Country

With Thanksgiving just two days away, grocers throughout the country are getting ready for increased customer traffic by stocking shelves and preparing employees to handle customer requests. While the holiday has time honored-elements that are unlikely to change any time soon, new trends are introduced every few years that make slight changes to one of the most traditional celebrations.

One of these new trends is Friendsgiving. If you haven’t heard of it, Friendsgiving is what its name suggests: a version of Thanksgiving that is a gathering of friends instead of family.

Friendsgiving doesn’t have the deep routes associated with Thanksgiving but is quickly becoming part of the holiday norm for many Americans, especially millennials. The Merriam-Webster website traces the origin of Friendsgiving back to 2007 with the term being used on social media posts to describe feasts preceding the Thanksgiving holiday. The event is seen mostly as a complimentary celebration for Thanksgiving that provides friends with the chance to catch up in a formal setting.

Ashley Fetters with The Atlantic recently wrote a story about Friendsgiving. In her research, she found that Google Trends for the word “Friendsgiving” started to appear more frequently in 2013. See below: 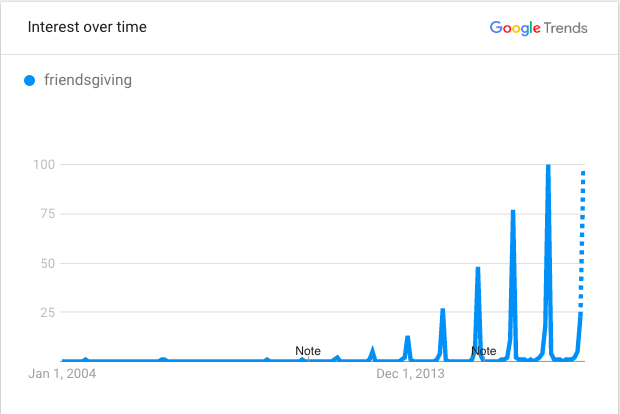 The terms of Friendsgiving are not as well defined as Thanksgiving; however, the event typically occurs several days or weeks before Thanksgiving. The gathering can be a substitute for Thanksgiving if the attendee is unable to make it home to their family because of work or other reasons. The event has elements in common with a Potluck: each visitor is responsible for bringing their own dish while the host may be responsible for providing the turkey or main course. This, however, is not essential and there are no strict rules as to what food is to be consumed. This has not stopped some from attempting to bring some oversight. Just this month, Maggie Glisan of Kitchn published the 10 Commandments of Friendsgiving, an attempt to provide some structure to what some participants describe as a free-for-all gathering.

Some grocers are capitalizing on this friendly celebration. In October, ShopRite and Thomas’ teamed up to announce the release of a Friendsgiving recipe guide, with the goal of providing a twist on traditional Thanksgiving meals. Some of the recipes include Everything Bagel Stuffing, Cranberry Swirl Bread Pudding, and English Muffin Green Bean Casserole. ShopRite and Thomas’ invite you to share your meals using these recipes on social media using #FriendsgivingWithThomas.

Friendsgiving is good news for retailers as customers could now be visiting your stores twice to celebrate not just the Thanksgiving holiday but the season, as friends gather to create their own new traditions.