Continued Surge in Produce Sales in Fresh, Frozen and Canned

Produce sales rose along with consumer anxiety levels. IRI found that 58% of consumers were extremely concerned about COVID-19 the week of March 22, up from 38% the prior week. 210 Analytics, IRI and PMA partnered up to understand the effect for produce. Produce continuing to move at unprecedented volumes regardless of where they are sold in the store:

“During these unprecedented times, everyone is coming together to help produce move from where it is to where it needs to go,” said Joe Watson, VP of Membership and Engagement for the Produce Marketing Association (PMA). “Matching distributors’ abilities with retailer needs, running at double the normal volume, rerouting product from foodservice to retail, consumer-direct solutions, new partnerships like small bakeries selling produce items and donations to food banks, this industry is doing it all to meet the consumer demand for produce.”

The inflection point  in shopping behavior was the week of March 1, when non-edibles started to gear up, but fresh produce sales gains were still much in line with trends seen in 2019 — ranging from -1.7% (fresh fruit) to +1.2% (fresh vegetables). Produce sales started to rise the subsequent week, at +3.1%, followed by a 33.9% increase the week ending March 15. For the week ending March 22, IRI showed vegetables up 39.2% —adding $227 million versus the comparable week in 2019. Fruits gained 21.1% over the week of March 22, which translated into an additional $116 million. “Our warehouse got wiped out after the first big wave of panic buying,” said Mike Kamphaus, President and CEO of Peirone Produce. “While the huge sales took the headlines, the positive attitude of our retail customers and our vendor partners is really the most impressive back story. They employed lots of creative solutions to get product back into our supply chain and out to our customers in record time. I would also call out the efforts of my warehouse workforce, many of which worked double shifts and our drivers who ran lots of extra routes to keep our retail customers in business. Forty years of being in business and I am still awed by the resilience and resourcefulness of our people!” 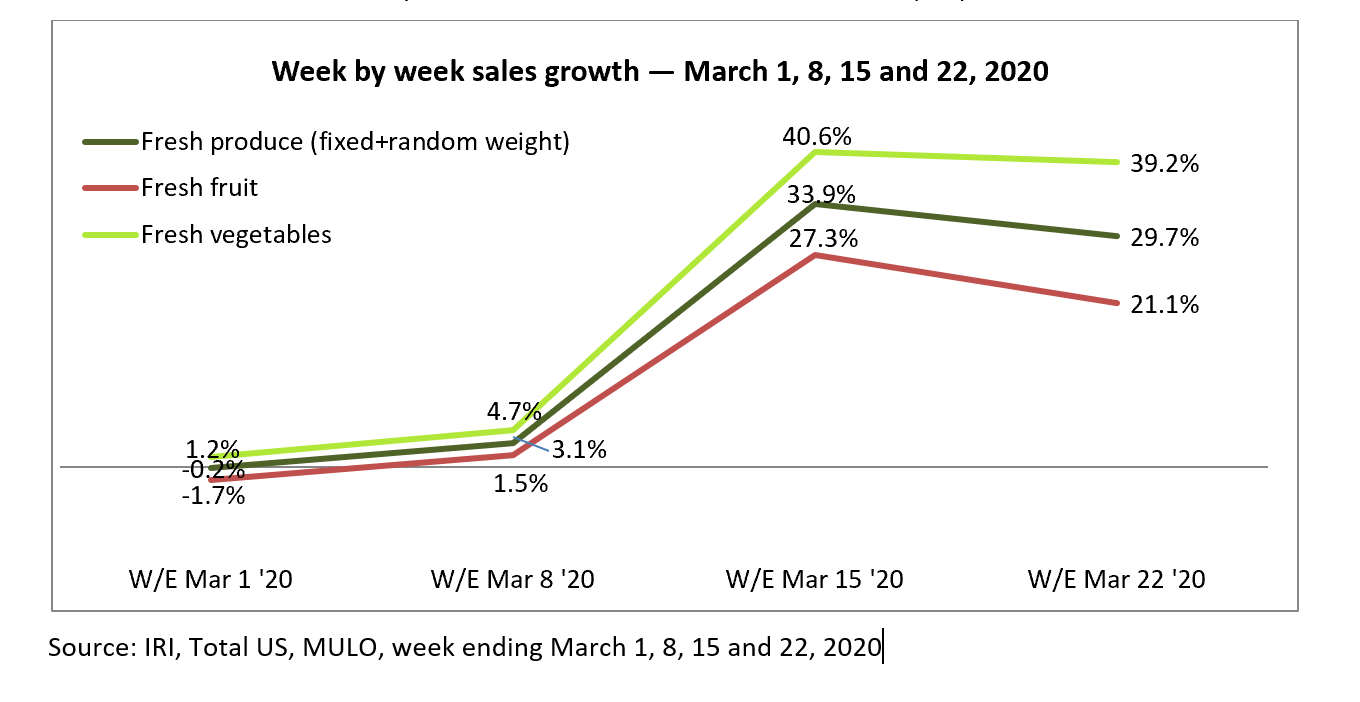 Sales increases extended across fresh produce items. In absolute dollars, the biggest fresh produce winners for the week of March 22 were once more potatoes that gained $61 million, or +114.7% over the comparable week in 2019. “The surge in potato sales these past few weeks has far surpassed even the level we see during the end-of-year holidays,” said the Produce Director for a large retailer in the Northeast. Berries were second, with a gain of $28 million, or 23.5%. Onions closed out the top three, with gains of $27 million, up 68.6%. Others that gained big were lettuce, apples, tomatoes, tangerines, bananas, oranges and carrots. Several retailers remarked that items with longer shelf life as well as packaged items moved faster, perhaps due to consumer safety perceptions. “Consumers often touch, pinch and smell fresh produce items before selecting the ones they want,” said Watson. “Along with our retail partners, we advise shoppers to wash their hands before and after store visits, minimize touching produce items and to wash/clean fresh produce properly once home. With proper handling, there should be no concerns about eating fresh produce.”

Fresh fruit sales saw a slightly bigger uptick during the week of March 22 than the week prior — no doubt to address the many more at-home consumption occasions, from more -home breakfasts, lunches and dinners to snacking and smoothies. On the fruit side, berries generated 22% of fruit sales, yet grew 23.5%. Similarly, apples generated more than 15% of all fruit sales and grew 28%.

On the fresh vegetable side, shoppers are stocking up on items with longer shelf life, in particular. Beyond potatoes, other impressive growth categories were onions, carrots and squash.

Fresh Versus Frozen and Shelf-Stable

Consumers continued to split their produce dollar three ways during the week of March 22. Fresh produce generates the bulk of total produce sales during regular times and it still does today,” said Jonna Parker, Team Lead, Fresh for IRI. “The size of the pie is one of the reasons why fresh produce growth percentages are lower than that of frozen and shelf-stable. However, consumers remained in a stock-up mindset the week of March 22 and that drove high interest in frozen and shelf-stable fruit and vegetables. The share of total cross-store produce sales for shelf-stable, for instance, is up from 10% during 2019 to 19% during the week ending March 22, 2020.”