Labor Day is on the horizon but so too are some hefty changes to the tax code. Democrats have been chomping at the bit since the passage of the American Rescue Plan last March to follow up with a “Build Back Better” smorgasbord of spending priorities from healthcare to housing, paid leave to universal pre-K.

So why am I so sure that tax increases are imminent? Let’s look at the blueprint that Democrats passed just last week. While the resolution itself does not contain any specific tax provisions, it does set out the framework for a $3.5 trillion reconciliation package. Notably, the budget resolution instructs the Congressional tax-writing committees – Senate Finance and House Ways & Means – must reduce the deficit by at least $1 billion over the next 10 years. This means that if Democrats stick with their proposed $3.5 trillion price tag, these two committees will need to find at least $1.76 trillion in revenue measures to use as offsets.

Congressional Democrats and the White House are now working to coalesce around a package of new spending policies and tax increases that will comprise the $3.5 trillion plan. While nothing has been agreed upon yet, more and more proposals are coming out as the process takes shape. House Ways & Means Committee is scheduled to begin their reconciliation work a week from today, which will give us a first glimpse at how big Democrats are willing to go on tax hikes. Though there are some moderates within the caucus who are wavering, every indication is that the committee will propose at least $1 to $2 trillion in tax increases.

To put the $3.5 trillion number into perspective, if President Biden, Speaker Pelosi, and Majority Leader Schumer can keep their members in line, this will be largest spending measure ever enacted. What makes “paying for it” so difficult – as many Democrats have claimed they would like to do, in full – is that there just aren’t a whole lot of new revenue trees that tax hikes can shake down. This is even more reason why we’re likely to see a variety of tax increases. Adding to the difficulty is President Biden’s promise that anyone making less than $400,000 per year will not see their taxes go up.

A Pound (or a Trillion Dollars) of Flesh

So how are they going to pay for $3.5 trillion in new spending? Below is just part of the laundry list of tax hikes that Democrats are contemplating, which should illustrate the size and scope of what is to come. Even if a handful of moderates balk at many of these hikes (Senators Sinema and Manchin have already publicly opposed the $3.5 number), grocers and other industries are still going to see a jump in their tax bill. 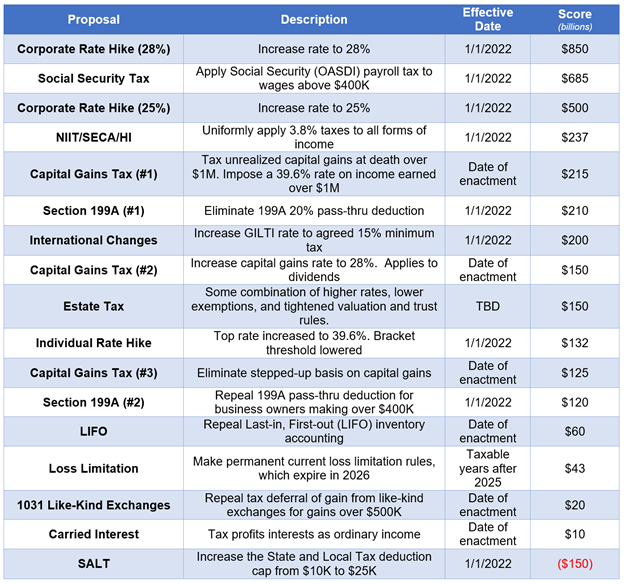 Democratic members of Congress need to know how these tax increases will impact Main Street. Congress hears a lot from lobbyists and interest groups, but business owners and job creators will be on the hook if these hikes become law.

Here’s a couple of ways to take action: