Last week, Associated Wholesale Grocers (AWG) President and CEO, David Smith, testified before the Senate Judiciary Committee during a hearing on the effects of discrimination and anticompetitive tactics by power buyers on independent grocers throughout the United States. 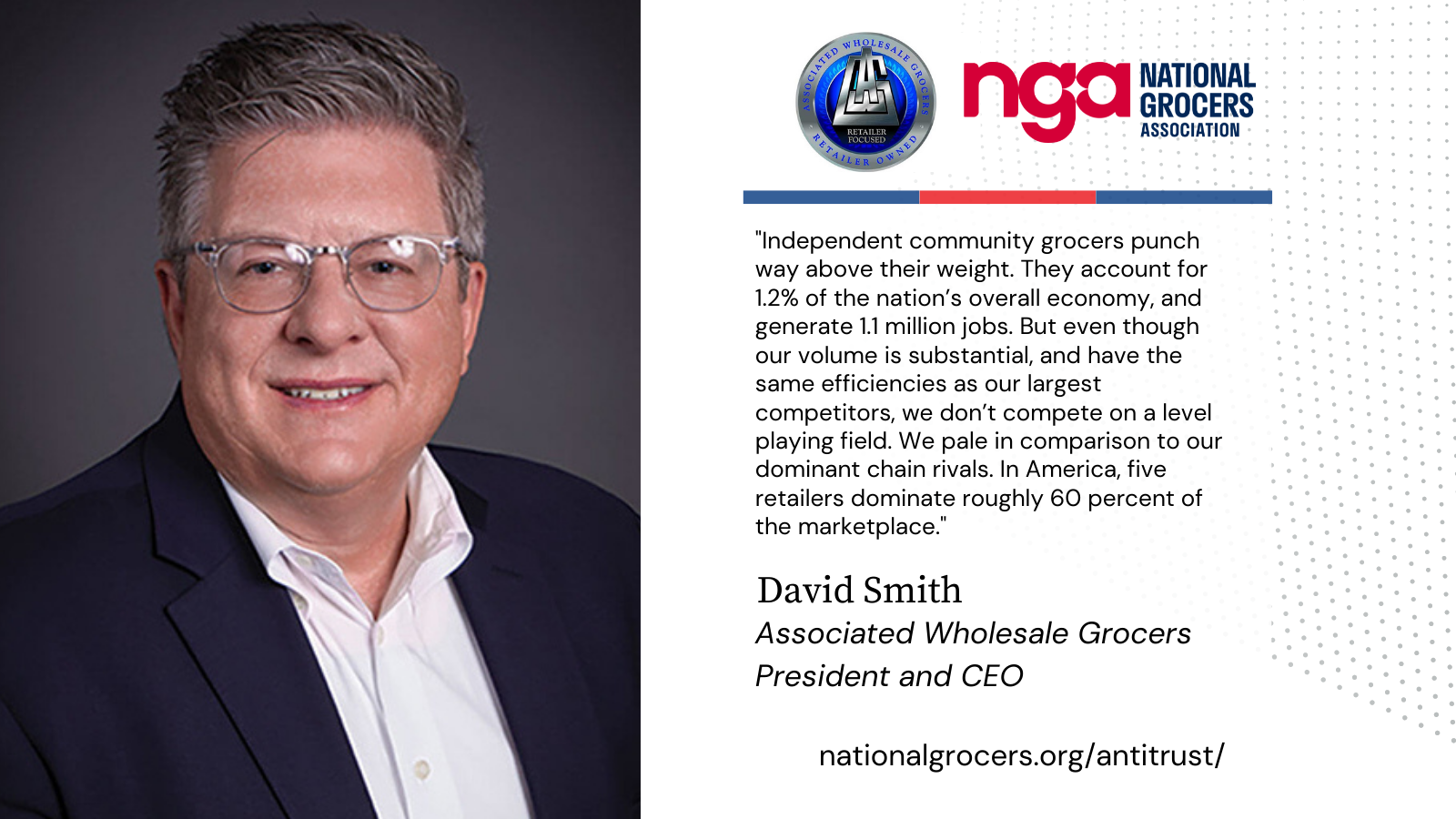 The hearing, entitled “Beefing Up Competition: Examining America’s Food Supply Chain,” will serve as a catalyst for bipartisan efforts to reform antitrust laws. During the hearing, he spoke about how independent grocers don’t compete on a level playing field with five retailers dominating roughly 60 percent of the marketplace.

Here is a quote from David’s testimony today:

“These dominant grocery retailers we call power buyers use their size and their positions as gatekeepers to American consumers to dictate terms and conditions to suppliers. This ranges from more favorable pricing, more favorable packaging, and access to exclusive products. Their size and market power alone enables them to secure advantages for themselves … and harm the smaller players in the food retail marketplace. And the pandemic has put this problem on full display. Everyday Americans who rely on community grocers have not been able to access the products they need to feed their families as the largest retailers demand priority access to high-demand products, like cleaning suppliers, paper products, and shelf-stable items.” 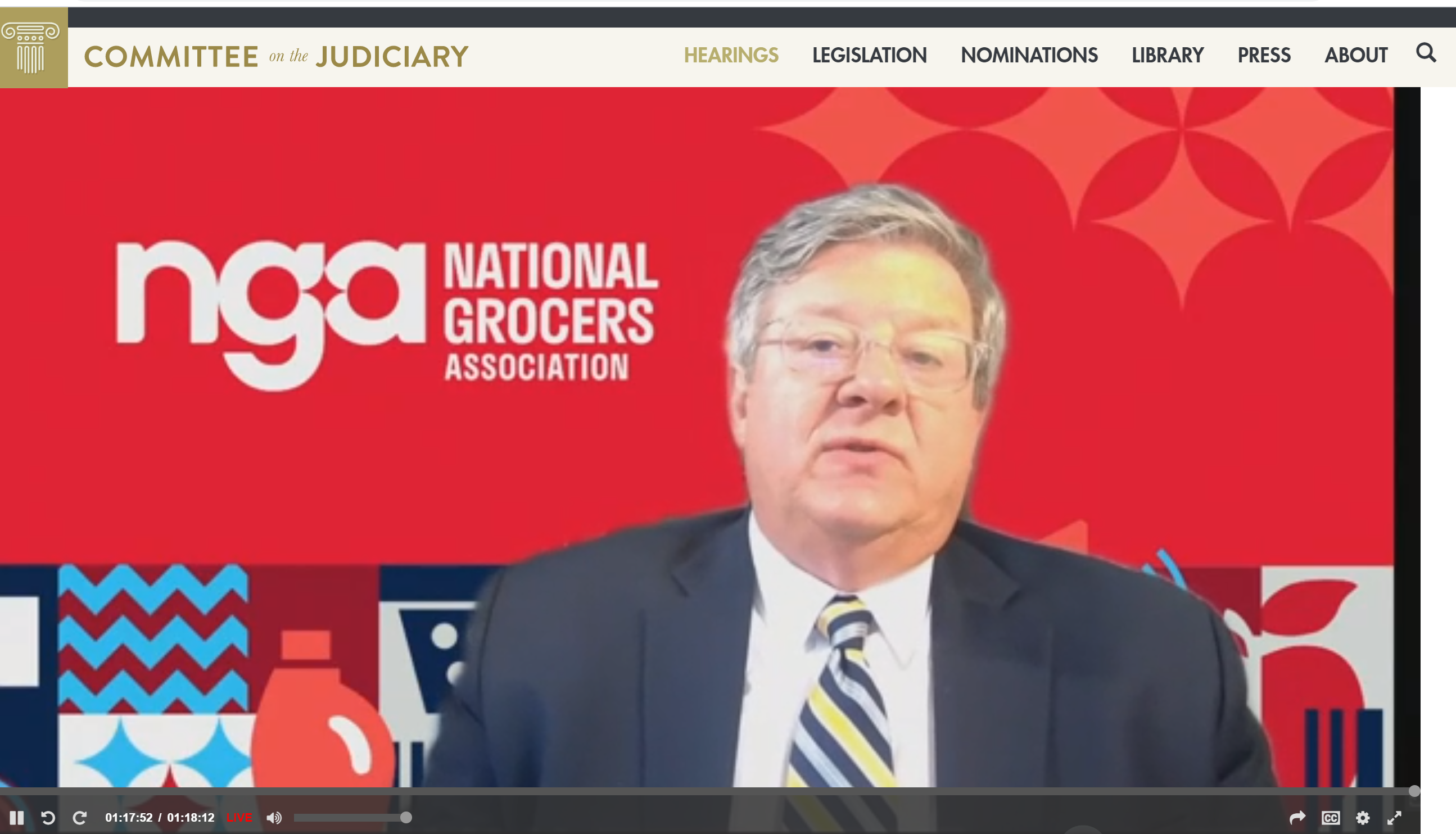 Antitrust reform gained momentum in early July when the Biden Administration announced an Antitrust Executive Order aimed at promoting competition in the economy. The parts of the Executive Order focused on the food sector are important as a diverse, competitive food retail marketplace benefits independent grocers. This marks the first time in more than 20 years the executive branch has acted to prohibit actions violating the Robinson-Patman Act, which aims to protect consumers and entrepreneurs from dominate grocery chains. This Executive Order directs FTC to enforce Robinson-Patman.

NGA SVP of Government Relations and Counsel, Chris Jones, then testified before the FTC and met with the White House to discuss antitrust reform and enforcement. During both events, Jones spoke about how the lack of antitrust law enforcement is harming independent, community-based, grocers. 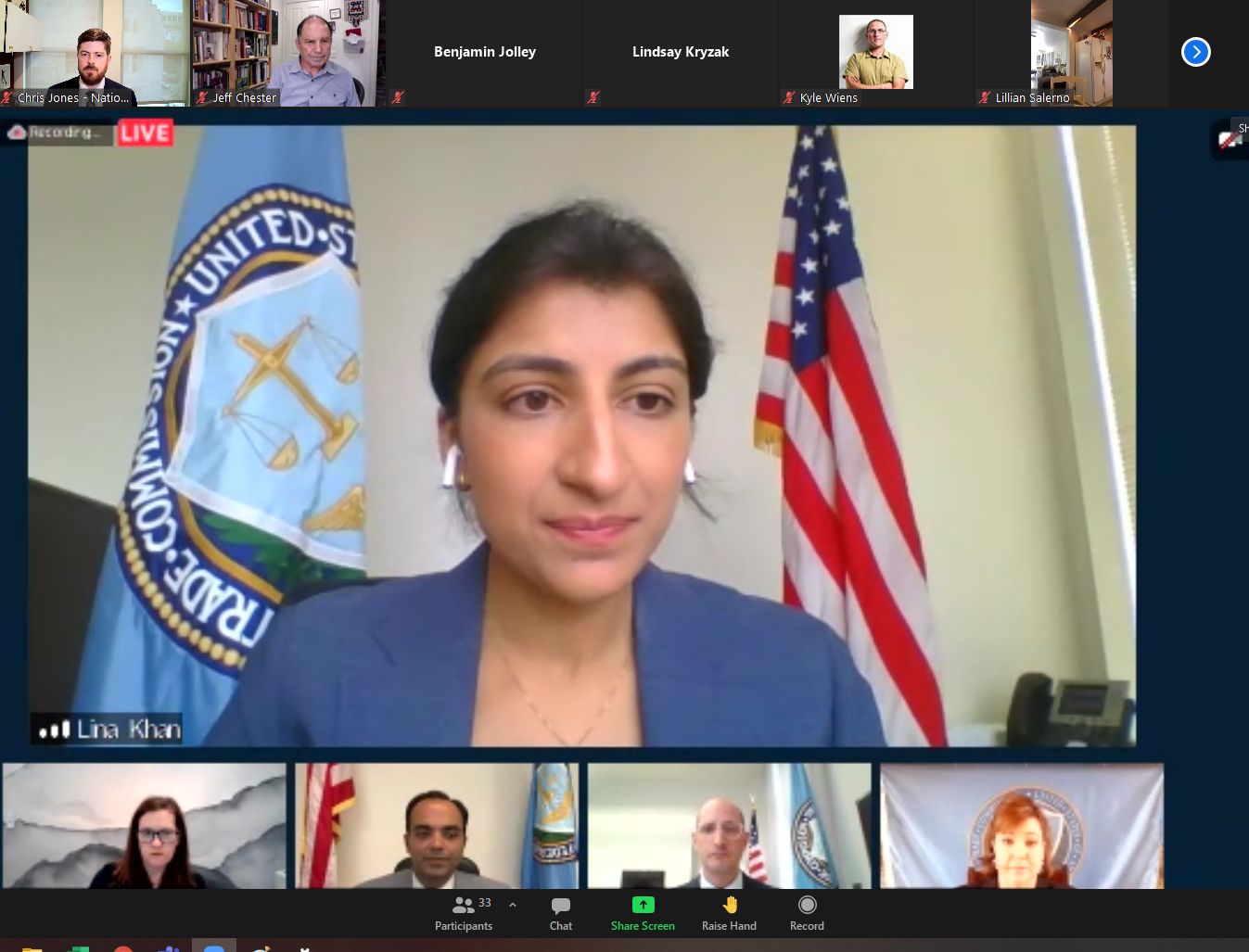 NGA SVP of Government Relations and Counsel, Chris Jones, testified before the FTC, the first business meeting under new Chair, Lina Khan. Jones called on the Commission to use its authority under Robinson-Patman to address anticompetitive buyer power putting independents at a disadvantage

The NGA Show (September 19-21) earlier this month announced the exhibit hall at the event has sold-out with 245 exhibiting companies and sponsors representing the full spectrum of product categories serving grocery retail. This news came as attendance for the show continues to increase with double-digit growth over last year.

NGA President and CEO, Greg Ferrara, said the following about the news:

“The September event is shaping up to be one of our best events yet, as retailers and wholesalers are looking forward to gathering in person this year. Even though the exhibit hall is sold out, sponsorship opportunities are still available for those vendors and suppliers who would like the opportunity to build relationships with our audience.”

The NGA Show will occur at Paris Hotel and Casino and Las Vegas. If you have not registered for the event yet, click here. And if you’re attending the event, consider joining us for the Executive Conference taking place right before in the same location. Additionally, Click here to watch a video message from NGA President and CEO, Greg Ferrara, about safety protocols at this year’s NGA Show. The safety of our attendees is always our top priority. To learn more about safety protocols at this year’s event, click here.

Cheryl Sommer, owner, president and CEO of Kaune’s Neighborhood Market in Santa Fe, New Mexico, received the Thomas K. Zaucha Entrepreneurial Excellence Award in July for her persistence, vision and creative entrepreneurship throughout the year. The Thomas K. Zaucha Entrepreneurial Excellence Award has been presented annually since 2009 to recognize an independent grocer’s persistence, vision and creativity. Zaucha, NGA’s first president and CEO, retired in 2010 after 28 years leading the association. The award represents his commitment to independent’s unique role as entrepreneurial leaders in communities throughout the country. 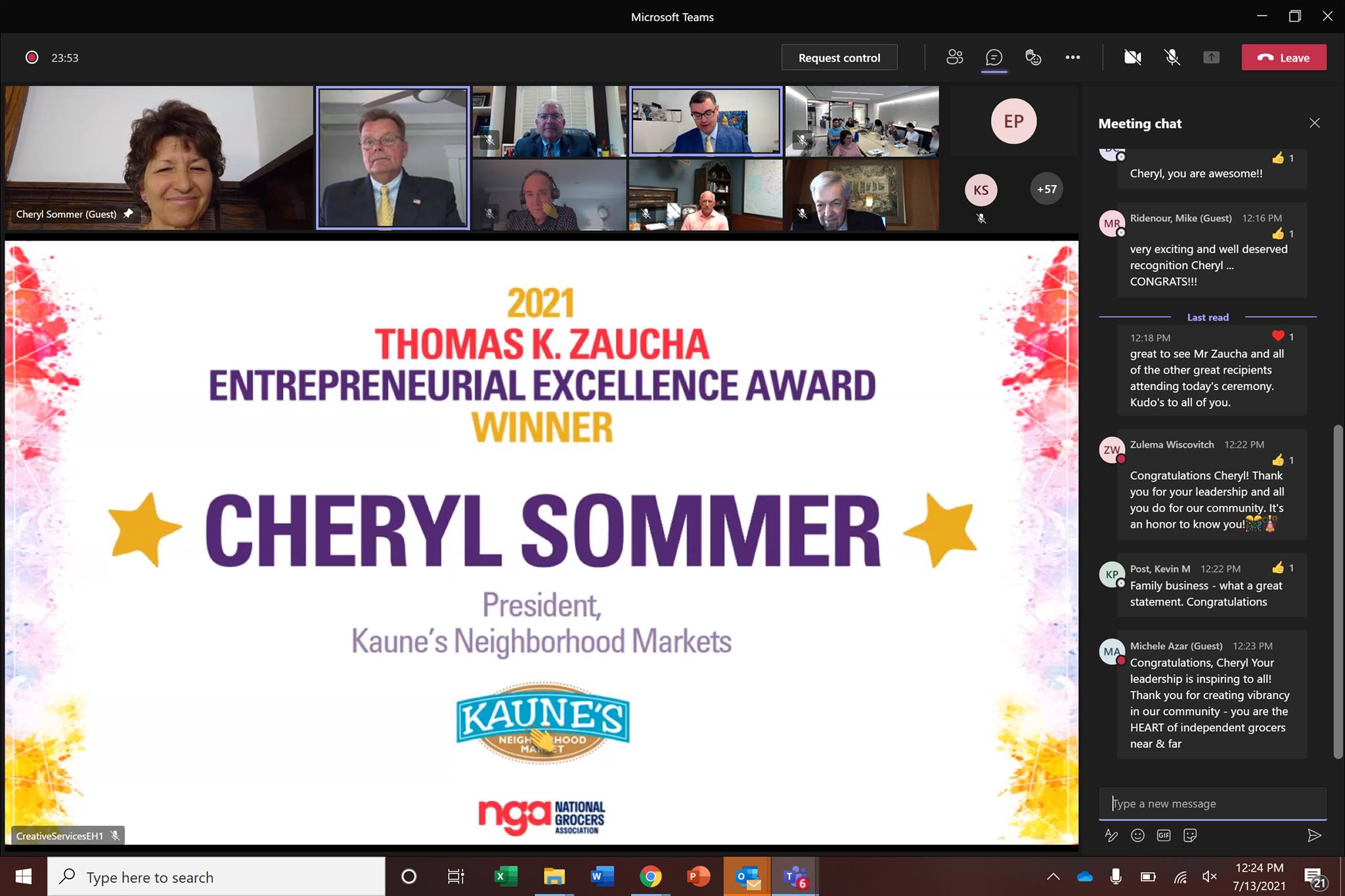 Mike Stigers, Chair of the NGA Board of Directors, said the following about Cheryl:

“Cheryl has not only achieved tremendous success for Kaune’s Neighborhood Market but has consistently been a strong advocate for the entire independent grocery industry, serving as chair of the NGA Board of Directors and in various other roles on councils and committees. In these roles, she has demonstrated many of the traits that made her a successful independent operator, helping NGA continue representing independent grocers effectively at the national level. I congratulate her on receiving this award and look forward to working with her for years to come.”

During the COVID-19 pandemic, Hansen’s IGA in Wisconsin launched an online shopping service for the convenience and safety of the many customers that have supported the grocery store for years, providing a lifeline for those who might otherwise not have the means to get to a store, those with limited transportation options, time or mobility. This is a complex service to offer and under a proposal written by U.S. Sen. Tammy Baldwin that would require retailers to add country-of-origin labeling (COOL) information to product descriptions on their websites, local independent grocers like us would face additional challenges offering a service like this to their customers.

As Greg Hansen, president of Hansen’s IGA put it in an op-ed in the La Crosse Tribune put it:

“If grocers had to start accounting for the country of origin for every product they carried online – which can differ from day to day, store to store and case to case – it would create a bookkeeping nightmare. Hansen’s would need a full-time employee just to maintain compliance. And the added cost involved would likely mean higher prices for shoppers.”

Jimmy Wright, president of Wright’s Market in Opelika, Ala., received the award on July 26 during the Alabama Grocers Association 2021 Convention at the Sandestin Golf & Beach Resort in Destin, Fla.

In September 2020, Wright testified before the U.S. House of Representatives Committee on Small Business on behalf of NGA, to discuss the effects of the pandemic on food businesses in a hearing titled, “How COVID-19 Is Impacting Small Businesses Across the Food System.” In his testimony, Wright called out how the pandemic has demonstrated a tilt in the economic playing field against small independent operators in several ways: lack of antitrust enforcement, dominance of power buyers in the marketplace, and limited ability to sell products to SNAP customers online. He also represented independent grocers before the Senate Agriculture Committee in 2017 in its deliberations around the 2018 Farm Bill.

Jeff Henderson, popularly known as Chef Jeff, will be the keynote speaker for the 2021 NGA Show, to be held September 19-21 at the Paris Hotel and Casino in Las Vegas.. The opening keynote session is sponsored by The Kraft Heinz Company, a long-time supporter of NGA and the independent supermarket industry.